This tap is the top of the range Intertap™ Flow Control (FC) Stainless Steel model.

It has all the advantages of the traditional Intertap™ design and is made from 304 grade stainless steel.

In addition to this, it also had the added advantage of the flow control leaver on the right hand side of the tap. This adjustment gives the operator full control over the flow speed. This makes balancing your beer lines a snap. This type of tap is typically suited to customers who are often switching from one beer style to the next and want maximum flexibility in their draft system.

The Intertap™ FC cannot be used with the shank spring so this tap should be manually turned off after use.

Typically most beer taps use a rear sealing design and the beer in the tap drains from the body of the tap with the help from a vent hole drilled at the front of the tap. This drainage hole is a dark and wet cavity and is an ideal place for airborne bacteria and wild yeast to reproduce leaving a foul film that deteriorates the quality of your beer. Every time the faucet is opened contamination occurs.

Now, when you close your Intertap™ tap, the forward sealing design shuts off the flow at the front of the tap which in turn keeps wild yeast and bacteria out of the interior of the tap body.

Put end to substandard beer and only use Intertap™.

Other forward sealing designs exist but nothing with the same level of reliability. It easy to find other “perl” forward sealing design taps however these taps use a floating o-ring design which by all means is equally as sanitary however the floating o-ring requires the oring to move within the tap body to seal correctly. This movement is typically a problem as the tap ages and/or is not serviced regularly. Intertap™ uses a sliding shuttle that holds the o-ring perfectly in position allowing a more reliable connection to be made with the seal. This is what makes Intertap™ the most reliable forward sealing design available.

Intertap™ uses a threaded spout that can easily be removed and replaced with a range of other spouts including:

Other tap designs require you to replace the tap on the font when changing from one beer style to the next. Intertap™ allows you to simply unscrew the standard spout and attach a range of different spout options to suit your beer style. Eliminate the need to ever replace your beer taps again and simply just purchase the spouts that you need.

Aussie Brewmakers is located in Mansfield Victoria - a farming country town that is the gateway to the beautiful Victorian High Country and Mount Buller.

Get in touch with us

We welcome you to contact us for any enquiries. 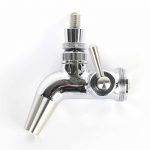 Intertap SS FC Tap & Handle
$64.95
Scroll back to top
Shopping Cart
There are no products in the cart!
Subtotal
$0.00
Cart
Checkout
Continue Shopping
0